skip to main | skip to sidebar

The last of my old photos scanned into flickr. These are from my cycling trip from Bordeaux to Barcelona in 2001. Possibly the best time I've ever had. 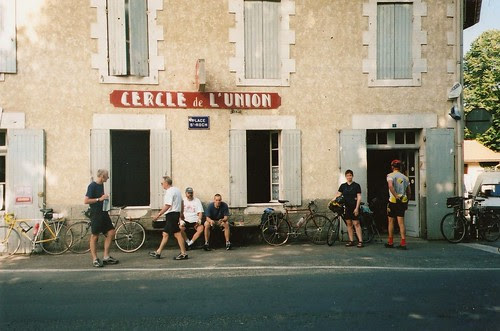 And this is a little video I made with animoto.

On one of my shorter, hillier cycle routes I pass by Glyndebourne Farm, home to some of the more exotic animals in the Sussex Downs. 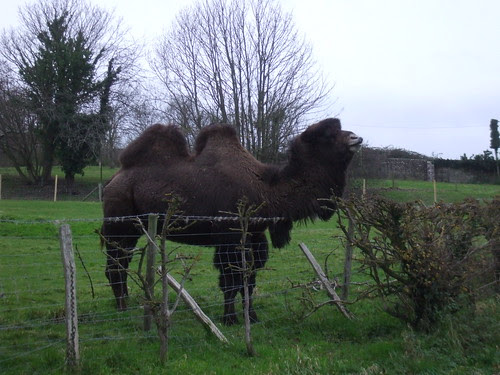 Other members of the genus Camelus to be found roaming across the downs are at least one Llama (Lama glama) and a herd of Alpaca (Vicugna pacos). 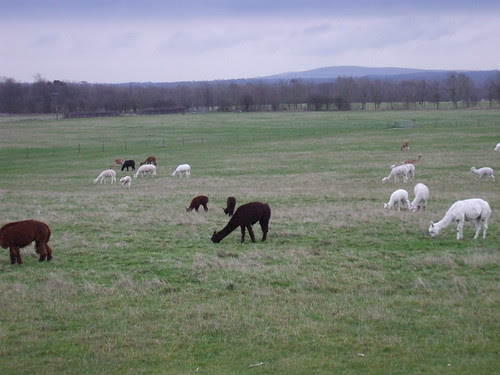 The farm is run by EP Cambridge UK (Formerly Atlantic Alpacas). According to their website they have open days. Might be a fun day out.
Posted by Alex Farran at 5:06 PM No comments:

I crossed the river and made my way past the offices, warehouses and light industrial units to Unit 9, Phoenix. Security was light - a smile was all I needed to get in. The battered doorway opened just wide enough to let one person through at a time - Low light levels are an essential part of this operation. Inside the dusty concrete warehouse an empty grease stained plastic chair faced me across a table covered in glossy leaflets and magazines. I flicked through them before turning round to take in the scene.

Two Virtual Humans introduced themselves as Sergeant Star and Ra'id. Star was relaxed and jokey, he tried to persuade me to sign up, but I declined. Ra'id was not at all happy to be there and became agitated if I asked too many questions.

I moved on to the training area. Here 'Warriors' are immersed in the sights, sounds and smells of the front line to prepare them for their assignments. Sights like a severed foot, smells like burning rubber and sounds like screaming. All painstakingly reproduced from real life samples.

The line between training and rehabilitation is a blurred one. The same technologies are employed for both. It's all part of the same game. The head of the project, Skip Rizzo, explained to me that returning Warriors often had a hard time adapting to civilian life. A pothole in the road is the IED that killed their friends, crowds are dangerous so they stay at home, commercial Hummers are a cruel joke. To put these men back together Skip's lab has developed a high tech version of Prolonged Exposure Therapy. They found that their patients were better able to deal with their traumas in the familiar environment of a video game.

Projected onto the back wall of the warehouse a version of the game ran in a loop. A small boy stood in front of it, entranced. He waved back at the virtual Iraqi boy in the market.

I made my way round once more to try and assimilate everything I'd seen. Then out into the sunlight, said thanks and goodbye and returned to the world I live in every day.


That, more or less, was my experience of the Virtual Iraq exhibition by Lisa Barnard. It really is a bit of trip down the rabbit hole. It's on every saturday and sunday until November 15th at Unit 9 Phoenix Place, Lewes. 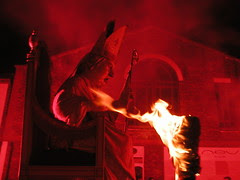 It's getting close to my favourite time of year in Lewes. The signs are already there - smugglers on every corner selling programmes for their bonfire society, strange goings on behind the pubs they use as their bases, and Rocket FM has started up again.

This Friday (17th Oct) I'm going to the costume competition to get a better look at the characters that will be parading up and down the streets on the 5th.

Here's something I wrote about my experience of the 5th back in 2001, when it was still all new to me:

I got to the high street at around 7:00, just before the parade started. A very excitable Asian student was next to me in the crowd, sat on his friends shoulders filming everything with his camcorder. An old hippy with a guitar approached him and sang a short song about him and his camera. A little further up the road someone gave the international distress signal by releasing a rocket into the air, and was duly visited by one of the many policeman in the area.

After a couple of exchanges on mobile phones and some hand waving I met my friend Paul and soon the parade was underway. Flaming torches, beer, fancy dress, marching bands, crowds shifting like the tide as the parade came and went, while the tannoy shouted out instructions to move back. I didn't see many tableaux this year, just one of what looked like a cows head. The parade seemed to end rather suddenly just as it had got going. Apparently Cliffe burnt a giant effigy of Osama Bin Laden, but I didn't find out about that until I saw the review of tomorrow's papers on Newsnight.

On to the bonfire and the fireworks. The Waterloo society's site is close to my house and is free. One day I'll get tickets to see Cliffe's, but not this year. The parade must have finished early because they hadn't even set light to the bonfire yet. Paul was pleased to note that there was a big sign halfway up it saying "Hello Paul". How nice of them to wait for him to arrive before starting! We got a burger, hot dog and some chips from one of the vans - served by the most humungously fat red-faced man I've ever seen - and watched as the bonfire boys threw burning torches at the bonfire. The fireworks hadn't started yet, but plenty of people had brought their own. Eventually the Waterloo society procession marched in, led by a Bishop and three priests (wearing safety goggles) who started the fireworks display by standing on a scaffold pulpit flanked by two burning crosses. They set off bangers right where they were standing and to shouts of "Burn the Pope!" dodged rockets and bangers being hurled at them. Rather them than me! But I assume they knew what they were doing as it happens every year, and just couldn't help myself laughing.

The fireworks began with some of those floaty ones that drift down on parachutes. As the spent fireworks drifted into the crowd, eager hands reached up to grab them - and then pulled back suddenly when they touched the still hot firework. The smart people reached for the strings of the parachute. That's how Paul caught one. And so it continued into the night, with two other firework displays clearly visible through the one we were watching.

This morning as I cycled to the bus stop the fire was still burning, but by this evening the only reminders of what had happened were a pile of ashes and a few empty beer cans outside Tesco that the clean-up teams had missed.
Posted by Alex Farran at 2:36 PM 3 comments:

Inspired by (and slightly jealous of) Lucy's photos of her extensive travels around the world I picked out some of my favourite photos from back when I still went on holiday, scanned them in and posted them to flickr. More to come soon, I've started with the earliest.
Posted by Alex Farran at 10:50 AM No comments:

I've recently started using unfuddle to manage my projects. It's very good, but nothing's perfect so I clicked their handy feedback button and sent this little message

When I have a lot of windows open in tabs it's hard to tell which is which because they all start with 'Unfuddling...'. It would be better for me if the more specific page name came first.

The next morning I got a reply:

Thanks for your feedback.

I can understand how this could be annoying. As such, we have moved the "Unfuddling" portion to the end of the title so that browser tabs can be more easily distinguished from each other.

If you have any other comments or questions, please do not hesitate to let us know.

This brought to mind something that Jon said at the werks last week. He had a similar experience with FreeAgent. Without him even contacting them, they sent an email saying something like this 'We see that you've had a problem with our service. Could you let us know what you were doing at the time so we can fix it.'

This is the kind of service that the internet makes possible. Something that Paul Graham noted in The Other Road Ahead (scroll down to Support). Good to see that the idea is catching on.
Posted by Alex Farran at 9:55 AM No comments:

The simplest template engine that could possibly work

In Templates Are Code, Too Hendrik explains in detail why the last thing the world needs is another template engine. So here's mine.